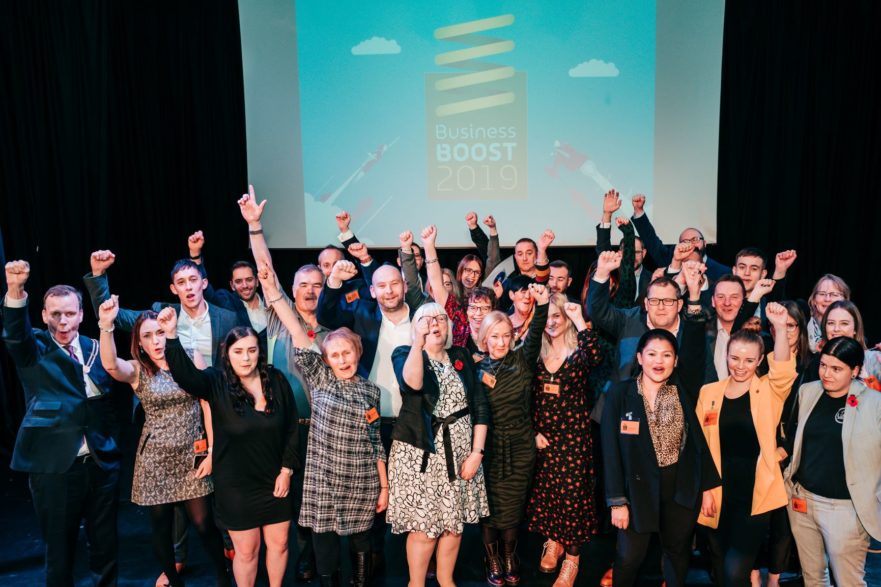 Business growth and potential were under the spotlight as the Newcastle-under-Lyme Business Boost competition unveiled its 2019 winners.

A diverse range of finalists took to the stage for the awards event held at Newcastle-under-Lyme College’s Performing Arts Centre.

Now in its 11th year, Business Boost attracted a record number of entries.

The major winners were:

Each company received a cash prize of £1,500 to spend on developing their business.

The judges also awarded their “special prize”, the Philip Astley Award, which went to Fresh2U, a Newcastle based catering company.

There were also a range of further awards on offer. These included the award of a year’s free membership of Staffordshire Chambers of Commerce, which went to web design company CyberKiln; two part-funded apprentice prizes sponsored by the Realise Fpoundation, awarded to Sempar Accountancy and SyTech IT; a stand at the Chambers of Commerce Let’s Do Business showcase, awarded to EBB Ltd and an advertising package for Newcastle-under-Lyme’s HitMix radio, won by Newcastle Pet Supplies.

Business Boost is run by the Newcastle-under-Lyme business community. A steering committee plan the annual competition and raise sponsorship to fund the prize pool.

Its unique selling point is its concentration on business potential, with entries being judged on what they can achieve rather than on past glories.
Entrants are given support to develop business plans and encouraged in their efforts to create jobs and growth in the borough of Newcastle-under-Lyme.

Committee Chair Sarah Da Silva, said: “This year’s competitors were of a high standard and it is an honour to be able to showcase and celebrate a wide range of successful and growing companies from the Borough of Newcastle-under-Lyme.”

The awards ceremony featured an interview with guest of honour Carol Shanahan, founder and managing director of Synectics Solutions and joint Chairman of Port Vale FC, alongside her husband, Kevin.

Carol and Kevin founded Synectics Solutions in 1992, in Newcastle-under-Lyme, and have grown the company to employ around 370 people.

Working alongside Kevin, Carol bought Port Vale in May 2019. She talked about company culture and the importance of putting people at the centre of your business – whether this be staff or customers.

Carol revealed that working in football had been a major culture shock, describing it as “an industry riddled by fear” due to short term contracts and the transient nature of players and coaching staff.

But she revealed that she regularly talked to everyone including the Manager and players, adding: “It has been wonderful to see the transformation as we have encouraged everyone to open up and be less fearful.”

ENDS
For media enquiries please contact Nigel Howle by telephone on 0776 2043436 or by email at nigel.howle@howlecom.co.uk