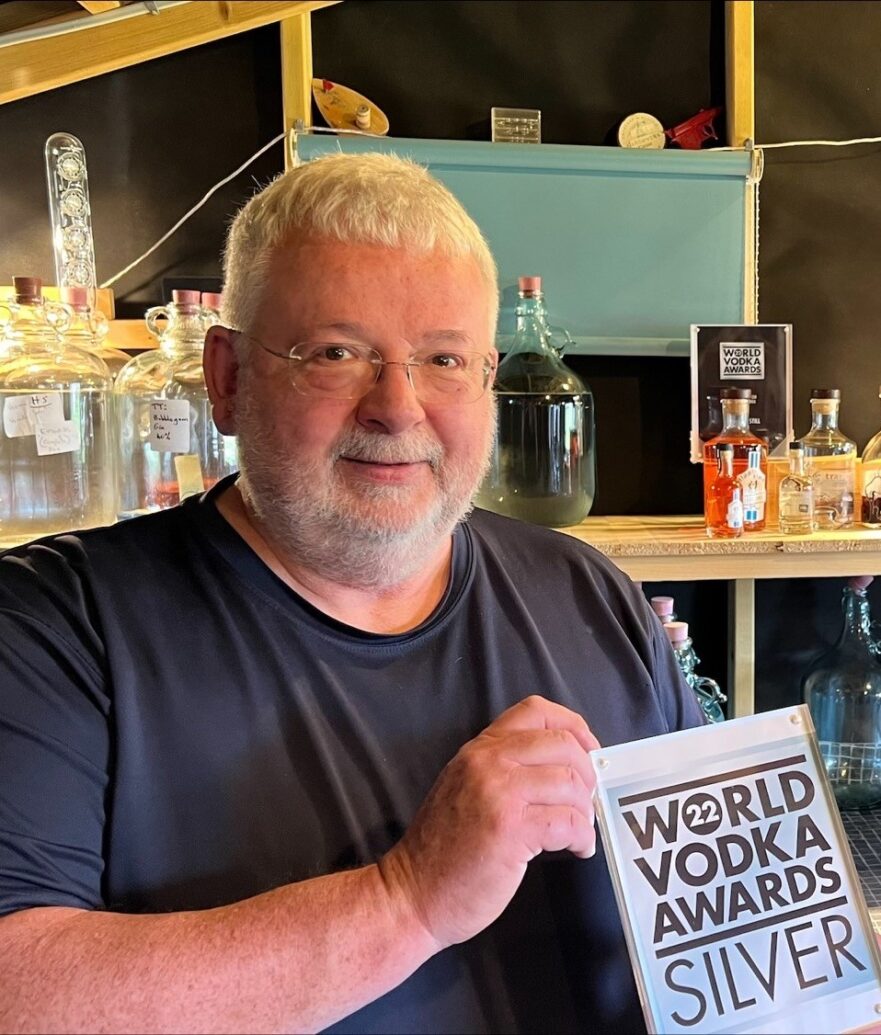 A master distiller working from a garden shed in rural North Shropshire is taking on the big names and creating world class gin, vodka and rum.

Tony Hobbs, the founder of Tranquil Still, says he’s moved from helping folk in low spirits to making high spirits after abandoning a highly successful career in mental health care for life in the slow lane working from his back garden near Market Drayton.

The former clinical psychologist has only been in the business for three and a half years but has already scooped major medals in the World Gin and World Vodka Awards.

Tony says the key to his success is he makes his own base spirit and a meticulous process, combining the finest botanicals to create the highest quality spirits.

“In keeping with our name, it’s a calm, considered and even tranquil process,” said Tony. “I have the capacity to make just 50 bottles a week.”

“l control the making of my base alcohol, putting together a recipe with a friend who has a small, bespoke brewery. There’s perhaps only 10 gin companies in the country who do that, as the norm is to buy in a neutral grain spirit, and the rest is down to patience, creating a balanced pallet of botanicals to ensure subtle flavouring and fabulous smoothness.”

Having randomly met someone who sells stills at a BNI Staffordshire business networking event in 2019, Tony decided to investigate and turned his garden office into a distillery.

“I began selling small batches to people I knew and it became clear that we had a great product. I set up a panel, blind testing spirits, including mine, and we were getting fabulous feedback and the business took off.

“Then I entered the World Drink Awards, thinking it was a great way of getting feedback to improve further, and to my amazement, the judges loved Tranquil Still.”

“The chair of judges told me my vodka was unique – I was amazed,” said Tony.

Tranquil Still has now grown from supplying friends and family to high quality craft food stores, fine dining restaurants and bars. An increasing number of people are purchasing through their website shop at www.tranquilstill.co.uk  and thanks to support from the England European Regional Development Fund Tranquil Still is now also able to develop bespoke gins for interested business customers.

Tranquil Still is receiving up to £3,265.86 of funding from the England European regional development fund as part of the European structural and investment funds growth programme 2014-2020. The Ministry of Housing, Communities and Local government (and in London the intermediate body greater London authority) is the managing authority for European Regional Development fund. Established by the European Union, the European Regional development fund helps local areas stimulate their economic development by investing in projects which will support innovation, businesses, create jobs and local community regenerations. For more information visit https://www.gov.uk/european-growth-funding