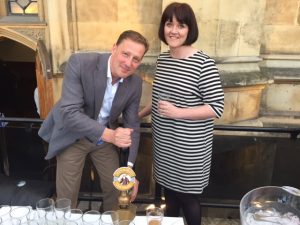 Sam Warrilow, Manager of the Sample Room at Titanic Brewery, attended the barbecue to present the first brew of Olde Maudit to the Serjeant at Arms and his guests.
“The barbecue was held on Parliament’s famous outdoor Terrace and was a fabulous occasion with guests from across the globe, including the US, Canada and Australia,” said Sam.
“Olde Maudit, an easy drinking golden beer, was brewed as a one off for the occasion, but it clearly went down well as we have been informed that the Strangers’ Bar would now like to stock it regularly.”
The invitation to Titanic to come up with a beer for the special barbecue came on the recommendation of Staffordshire MP Andrew Griffiths, Chairman of the All Party Parliamentary Group for Beer. 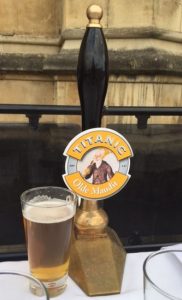 “Mr Griffiths is a friend of Titanic Brewery, having campaigned for beer tax reductions alongside our own Managing Director, Keith Bott,” explained Sam. “It was an honour to be asked to brew Olde Maudit and we are thrilled to have been asked to become a regular supplier to Parliament.”
ENDS
For media enquiries please contact Nigel Howle on 07762043436 or email nigel.howle@howlecom.co.uk

Notes to Editors:
For further information about Titanic Brewery and its award winning beers visit the company’s website atwww.titanicbrewery.co.uk Titanic Brewery was founded in Burslem in 1985 and has grown to produce around three million pints of fine ale every year. It is owned by Stafford born brothers Keith and Dave Bott. Keith is Chairman of SIBA, the society of independent brewers. The brewery name is in recognition of Stoke-on-Trent as the birthplace of Captain Edward Smith, Master of the ill-fated Titanic ocean liner.