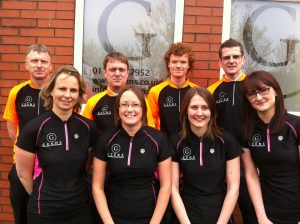 A battle of the sexes has broken out at long established Stoke-on-Trent accountancy practice, Geens, as staff prepare for a gruelling charity challenge.

Geens’ partners, Steve Archer and Karen Lowe, will lead male and female teams as Geens attempt to raise £10,000 for the Stoke-on-Trent based Douglas Macmillan Hospice and Regain, a charity which helps injured sports men and women.

The Snowdonia Charity Challenge, on 6 July, involves cycling and canoeing along with the climb to the peak of Snowdon.

“Training is underway and the office is buzzing as the rivalry builds,” said Karen Lowe.

“We have split the participants into teams of men and women with the girls taking on the name of the Geens’ Credits and the boys suffering the nickname of the Geens’ Debits – it has all added to the fun atmosphere.”

Staff at Geens, of Liverpool Road, Stoke, are no strangers to taking on a challenge for charity.

Together with several colleagues, Karen has completed the Three Peaks Challenge and the Potters Half marathon, raising around £20,000 for good causes.

“We are setting the target at £10,000 again this year,” said Karen. “The official charity for the challenge is Regain and we need to raise £4,000 to enter two teams.  But we also wanted to support the Douglas Macmillan Hospice, which Geens has a long association with, and we will be looking to split £10,000 between the two fantastic causes.”

Regain provides support for Tetraplegics who have suffered injury while playing sport.

Karen added: “Staff at Geens have conquered the Three Peaks challenge and run the Potteries Half, but this is going to be very tough.  It starts with a 20 mile cycle ride, including steep off road sections. We then climb Snowdon and canoe across Llyn Gwynant punctuated by two further 10 mile stints on the bike.”

Geens is a well known firm of Chartered Accountants and have been working in the Stoke-on-Trent area for more than 120 years.

Donations to the Geens charity fund can be made via https://www.justgiving.com/teams/geensaccountants