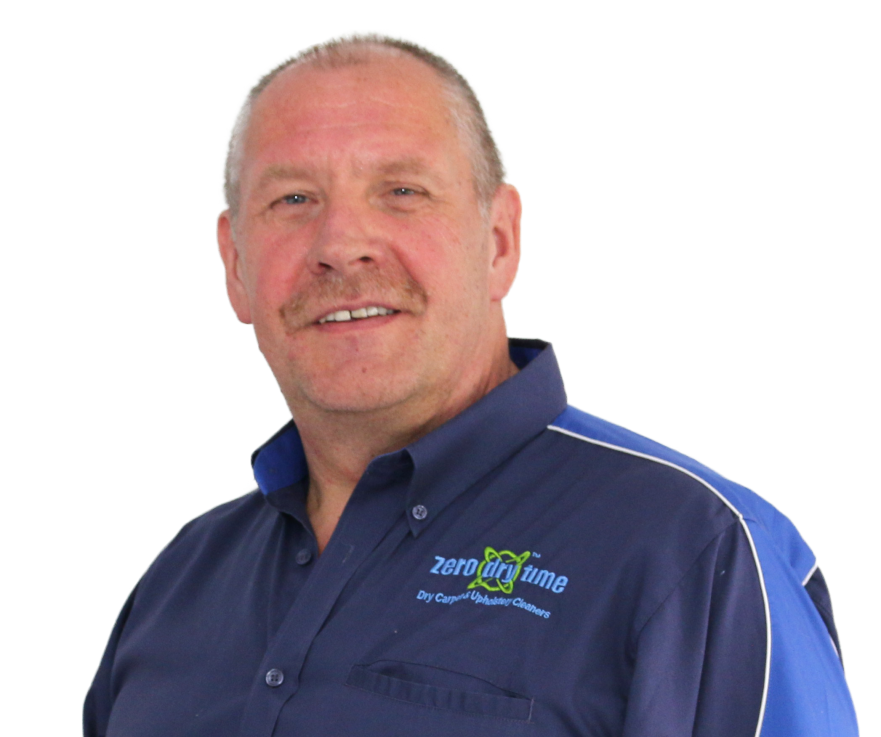 A former Royal Marine Commando who  has beaten serious illness, personal tragedy and business highs and lows has vowed not to allow Coronavirus to halt his latest business venture. Ian North, from Barlaston, has  survived a brain tumour, a serious assault and much more but has always come back fighting.

Ian, aged 58, has seen Zero Dry Time, the carpet and furniture cleaning business he runs alongside his wife Jayne, disrupted by the current pandemic but has vowed to start visiting customers again in June.

“Life has been eventful but through it all I have always been resilient and I won’t let a pandemic stop me growing Zero Dry Time,” said Ian. “The timing of the lockdown has not been kind, as we had spent 2019 building up work, following my recovery from a brain tumour.

“Zero Dry Time will be ready to emerge from lockdown in the next few weeks having ensured that we have taken all safety actions necessary to open up to customers again.

“Together with Jayne and my former Royal Marine friend and colleague Mervyn, I’ll be visiting homes and businesses again. We will be wearing PPE and taking full social-distancing precautions.”

Ian took on the Zero Dry Time franchise for Stoke-on-Trent South, Stafford and Uttoxeter in 2015 and built the business up so well that he was named Franchisee of the Year, before illness struck him hard.

He explained: “I have suffered headaches dating back many years.  While I can’t conclusively pinpoint the reasons for the headaches, I sustained a serious head injury while in the Marines and this led to my medical discharge from the service in 1983.

“More than 30 years later, I went to hospital for a CT scan and a mass was found in my brain. This led to a series of operations where I had my skull cut away. The surgeon and staff at Royal Stoke were fantastic but my recovery inevitably took time and I had to take time away from work.

“Having taken on the Zero Dry Time franchise for Stoke-on-Trent South, Stafford and Uttoxeter in 2015 and built up the business, I had to put everything on hold, only getting up and running again in 2019 thanks to Jayne and Mervyn taking some of the workload off my shoulders.

lan, who grew up in Stafford, has had a rollercoaster of a career and suffered much personal tragedy. His  first wife died of breast cancer and, after eventually finding happiness again with Jayne, she was also diagnosed with the disease, before fortunately pulling through.

“I joined the Marines straight from school, aged 16, and was extremely proud to serve.  Sadly, the head injury meant I had to rejoin civilian life seven years later and I returned to Stafford, eventually securing a role as a fireman at GEC,” said Ian. “My wife’s cancer changed my life again and I had to leave work. I was devastated and also needed to be at home with my young family.”

He made a great success of the business until cancer struck his family once again. Having met and married Jayne, she was diagnosed with breast cancer and Ian again decided to put work on hold.

Following many months of chemotherapy and radiotherapy, Jayne pulled through and, seeking a new challenge, the couple took on the challenge of a charity trek to Costa Rica, raising £50,000 for breast cancer care.

“Jayne was amazing, she had just nine months to get fit and ready for a 100-mile, gruelling trek, but she’s full of determination and was up to the challenge,” added Ian.

Returning to England, Ian and Jayne embarked on a new business venture, running a successful outdoor events business before deciding to take another career break following the extremely wet summer of 2014.

But Ian’s determination to work was still there and a visit to the Franchise Show led to a new career with Zero Dry Time.

Explained Ian: “I drew up a shortlist of franchise options and was most impressed with Zero Dry Time. I found the ethos of the owners to be fantastic and I could see they had built a franchise model that helped people make a successful career.

“It proved to be the right choice and over five years later, despite the trauma of major surgery, we have a blossoming business. Coronavirus has been a set-back as it hasn’t been possible to visit customers’ homes or offices since early March. Like most people, Jayne and I have stayed at home for the past 10 weeks, but we’re now raring to go again.

“I am determined man and through amazing care at Royal Stoke, my devoted wife Jayne and the support of the Royal Marines Association, I beat my brain tumour, so I’m not allowing a pandemic to defeat me. We have bided our time as we didn’t want to jump straight back into work when the PM announced that lockdown would be eased.

“Our customers trust us to go into their homes and we see that as a privilege. We owe it to them to ensure safety is the number one priority once work resumes.”

Zero Dry Time operates across the UK through a network of franchisees. The company offers  holistic, environmental friendly cleaning solutions, from trained, professional cleaners, using non-toxic products that are safe for pets, children and the environment. The company has developed a quick-drying, odour-free cleaning formula which guarantees a deep clean for carpets, leather and fabric.