Embassy Hair from Newcastle-under-Lyme has won a place in the Grand Final of the UK’s most prestigious hairdressing awards. 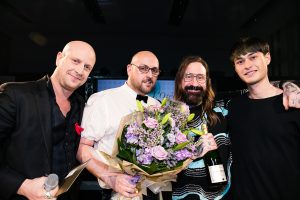 Embassy will now have the chance to compete at the L’Oréal Colour Trophy Grand Final event which could see them winning the overall title of L’Oréal Men’s Image Award 2016.

On Monday 13th June, 2016 the team will have to complete one final challenge to win the prestigious award as they compete against the winners from the other regions in the Men’s category at the InterContinental Hotel, the o2 Arena, London.

“It was a fantastic night and our stylists and models performed exceptionally well,” said Michael Clowes from King Street based Embassy. “The L’Oreal judging process demands the highest standards and we will be rubbing shoulders with the elite of British hairdressing at the Grand Final.”

The Grand Final show promises a thrilling and inspirational evening featuring spectacular hair shows by some of the industry’s most illustrious names in hairdressing followed by a 5 course dinner and the awards presentation.

The overall winners from the competition will be awarded a once-in-a-lifetime prize package which includes a three-day European trip with a  photo shoot to showcase their winning look, a fashion shoot with a leading consumer glossy magazine and a comprehensive personalised plan to promote the salons win.