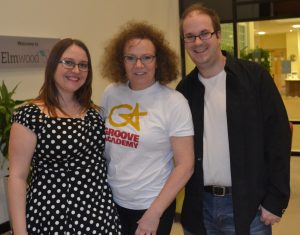 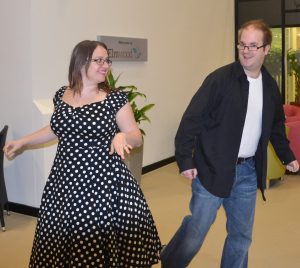 “I started ‘grooving’ in 2008 and only went along on a whim because friends told me it would be fun,” said Philip Sant of Ranton.

But that chance visit to a Groove Academy salsa class at Stafford Rangers led to Philip falling for both dance and the woman who would become his wife.

The dance bug struck Philip and he became a regular Groove Academy attendee and eventually a dance instructor.

Computer Systems expert, Phil added: “I first met my wife Laura at a dance class at Stafford Rangers in 2010 and we’d often find ourselves at the same classes at Stafford and at the Aquarius Ballroom, Cannock.

“We did a lot of Rock n Roll dancing and, while dancing to Reet Petite, Laura told me it was her grandfather’s favourite song.

“I suggested that we choreographed a routine for the song to be danced at a party and our relationship grew from there.”

Laura and Philip went on dance holidays to Jersey and the famous Blackpool Tower ballroom with others from the Dance Academy and they eventually tied the knot at the Moat house Hotel, Acton Trussell, last year.

Kate Beauchamp, owner of the Groove Academy was there having choreographed the couple’s wedding dance.

For media enquiries contact Nigel Howle by telephone on 0776 2043436 or emailnigel.howle@howlecom.co.uk.

Founded by Kate Beauchamp in 2006, the Groove Academy provides tuition in a variety of traditional and modern dance styles for children and adults of all ages.
Groove Academy is based at the Northfield Centre, Magnolia Avenue, Stafford, where there is a dance studio. Further classes are held at St Dominic’s Social Hall, Station Road, Stone.