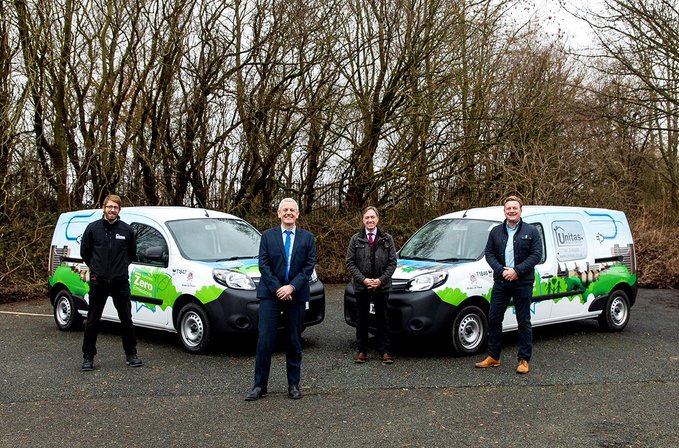 To emphasise the green-theme, Graphix used recycled vinyls, designed in the company’s Norton,  Stoke-on-Trent studio and applied in Graphix’ purpose-built fitting bay, to wrap the vans, which are now in use helping residents across Stoke-on-Trent.

Graphix has previously worked with Unitas to brand their extensive fleet of vans, but Managing Director Steve Ward, said the new electric vans gave his design team a chance to pull out all the stops on  the creative content.

“We wanted to celebrate Unitas’ move to electric vehicles and proposed bright, green-themed designs to the management team, featuring scenes from Stoke-on-Trent. The concept was enthusiastically embraced by Unitas and we’re delighted with the finished product.

“It’s fantastic to win repeated contracts to work with Unitas. We’re proud of our city and it’s satisfying to work with a company who strive hard to build a better city, repairing and maintaining the local housing stock.”

Graphix are also approved suppliers to Stoke-on-Trent City Council and have longstanding partnerships with many companies in their home city, including bet365.

Steve added: “We work nationally but our roots are firmly in North Staffordshire, so it’s satisfying to have such strong links with the area. We’re official signage and print suppliers to Stoke City FC, working with the club to brand the bet365 stadium, the training ground at Clayton Woods and the club’s shops.

“Our name can be seen on the LED pitch-side boards at every Potters’ home game and we were delighted to be main match sponsor for the recent Stoke City versus Luton Town home game.

“I founded Graphix with my brother Simon Ward in April 1993. I’m a trained graphic designer and Simon is a print specialist, We’ve seen much growth since the early days, when we worked from our parents’ home at Norton Green. We now have a purpose built studio, team of designers, web developers, printers and signage installers and have invested in excess of £300,000 on cutting edge print machinery.

“Recent projects in North Staffordshire have included the design, print and appliance of new branding for leisure centres across the Staffordshire Moorlands but our work takes us across the country, for example, supporting Cadbury World, Birmingham, with new wall coverings at the popular, chocolate-themed visitor attraction.”