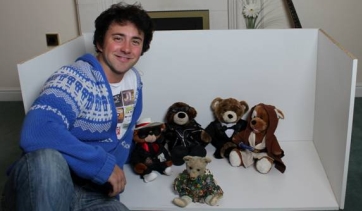 Nathan, owner of Stone based NKW Promotional Film makers created a series of film shorts when Business for Breakfast Director Stuart Walton asked him to create a promotional film which would help the brand to stand out from the crowd at a business exhibition.

Ted was pictured acting out key scenes from films such as Star Wars and the Godfather.

“We took the videos to the Let’s Do Business exhibition in Stoke-on-Trent and it generated a lot of interest.”

Visitors to the Staffordshire BforB stand were asked to guess the movies for the chance to win a bottle of champagne.

The film shorts are now available on You Tube at www.youtube.com/user/BforBStaffs.

Stuart said: “I was looking for a novel way to promote BforB and Nathan came up with Ted Goes to the Movies.

“It put a smile on people’s faces and helped raise awareness of the BforB brand.”

The attached photograph shows Nathan and the film star bears.

NKW was founded by Nathan Williams in 2008.  The company primarily produces marketing and promotional film for companies.

Let’s Do Business, organised by the North Staffordshire Chamber of Commerce and Industry,  was held at the Moat House, Festival Park, Stoke-on-Trent, on 16 November.