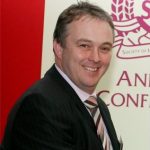 Titanic Brewery’s Keith Bott will be among beer lovers lobbying Parliament on Wednesday armed with support from his local MP.

Joan Walley, MP for Stoke-on-Trent North, today called on the Government to back British brewers and described traditional local pubs as “places to value.”

Her comments come as CAMRA (the Campaign for Real Ale) prepare for a mass lobby of Parliament on Wednesday.

CAMRA has organised the event following the Government’s refusal to halt the damaging Beer Tax Escalator which increases the price of a pint by two per cent above the rate of inflation each year.

In a message of support for Burslem based Titanic Brewery, Ms Walley said: “We simply can’t stand back and see more pubs close. At times of austerity it is more important than ever that we keep our communities intact and that local pubs are places to value. The Chancellor must be told exactly how much they matter. Instead of calling ‘Time Please’ he should be listening and using his Budget to help pubs through difficult times.”

Titanic Brewery, based in Burslem, Stoke-on-Trent, has seven pubs in Staffordshire, and supplies many more pubs across the country.

It has bucked the trend of pub closures in recent years and Mr Bott says further expansion is possible if the politicians give him a level paying field.

“Pubs play a vital role in many communities,” said Mr Bott. “They are often a hub for local activities and are part of the fabric that keeps a community together.

“For example, Titanic Brewery has recently taken on the management of the Hollybush Inn, Seighford, near Stafford, a pub so precious to local people that 70 of them bought shares to buy and reopen it.”

Since the introduction of the beer duty escalator, excise duty has increased by 42 per cent, or nearly 20 pence per pint. Beer sales in pubs and clubs have fallen by 23 per cent and over 6,000 pubs have closed.

Beer taxation now costs the average pub around £66,000 per year.

Titanic’s full range of beer can be seen on the company’s award winning website at www.titanicbrewery.co.uk  Titanic Brewery was founded in Burslem in 1985 and has grown to produce 2.3 million pints of fine ale every year. It is owned by Stafford born brothers Keith and Dave Bott. Keith is Chairman of SIBA, the society of independent brewers. The brewery name is in recognition of Stoke-on-Trent as the birthplace of Captain Edward Smith, Master of the ill fated Titanic ocean liner.