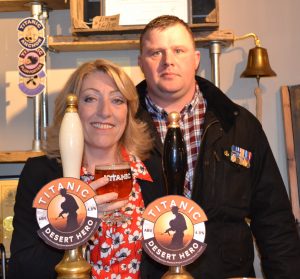 Thousands of JD Wetherspoon’s pub-goers will raise a glass of Titanic Brewery beer to the Sun on Sunday’s campaign for a memorial to Britain’s desert heroes.

The Sun on Sunday is calling for donations towards a £1 million Whitehall memorial for armed forces heroes who fought in Iraq and Afghanistan.

Thousands of pints of the specially brewed Desert Hero ale are to be shipped to hundreds of JD Wetherspoon pubs to be served during April and June.

JD Wetherspoon chief executive John Hutson said: “We are delighted to be backing this campaign and are confident that our customers will welcome the opportunity to enjoy a superb beer from Titanic and raise funds at the same time.”

Keith Bott, Managing Director of Titanic Brewery, added: It is an honour to be chosen to support such a fantastic campaign. The whole country should get behind this campaign to provide a fitting tribute to the servicemen and women who saw action in the two Gulf Wars and Iraq.

“Titanic and JD Wetherspoon are making a donation from each cask of Desert Hero but, just as importantly, we hope the presence of our beer in hundreds of popular pubs will raise awareness and lead to the stepping up of fund raising efforts.
The Sun on Sunday has already raised more than £200,000 after it urged major companies to dig deep for the desert heroes.

The Treasury has also agreed to waive VAT and an announcement of £500,000 in the Budget from fines accrued through the LIBOR banking scandal means fundraising has now reached over £700,000.

Craig Woodhouse, Political Correspondent at The Sun, said: “It’s great to have Titanic and Wetherspoons involved in our campaign to make sure the service and sacrifice of troops and civilian personnel over 24 years of desert warfare in Iraq and Afghanistan is remembered forever. We’re almost at our £1m fundraising target so I’d urge everyone to enjoy a pint of Titanic’s special ale Desert Hero, toast our troops, and help bring this important memorial into being.”

More than 300,000 servicemen and women, supported by thousands of civilians, saw action in Iraq and Afghanistan between 1990 and 2014.

Tragically 679 paid the ultimate price while thousands more were injured in action.
Plans for the national memorial were announced by David Cameron in the Sun on Sunday last November.

Former Chief of the Defence Staff Lord Stirrup is heading a charity known as The Iraq/Afghanistan Memorial Project and the newspaper is leading the campaign to raise the funds.

BY TEXT: To donate £3 Text DUTY to 70080
To donate £10 Text DUTY to 70707
OR CALL: 0330 123 20 70 to donate over the phone
The Iraq/Afghanistan Memorial Project (charity number 1160028) will receive 100 per cent of your donation. Texts will be charged at your donation plus standard network rate.Text donations do not work from outside the UK and phone calls from abroad will be charged at international rates. Donation services are provided by Spoke, 0333 202 3390

Notes to Editors:
For further information about Titanic Brewery and its award winning beers visit the company’s website at www.titanicbrewery.co.uk. Titanic Brewery was founded in Burslem in 1985 and has grown to produce more than 2.3 million pints of fine ale every year. It is owned by Stafford born brothers Keith and Dave Bott. Keith is Chairman of SIBA, the society of independent brewers. The brewery name is in recognition of Stoke-on-Trent as the birthplace of Captain Edward Smith, Master of the ill-fated Titanic ocean liner.