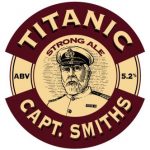 A challenge to “Grow a Mo Like Captain Smith” is being made by Titanic Brewery as its pubs join the Movember fundraising effort in Stoke-on-Trent.

The brewery is backing a campaign which will see the Potteries renamed as Motown for a month as supporters get behind the annual fund raising marathon for cancer research.

Titanic is changing the name of its November seasonal ale from A Night to Remember to A Night to Movember and will make a 10 pence donation to the cause for every pint sold.

Stoke-on-Trent has been earmarked as the West Midlands base for Movember in recognition of the success of fund raisers in the city a year ago.

Talks have been held with Angela Smith, a well known figure on the local sports and charity scene, who has agreed to co-ordinate a special Movember effort in the city.

Angela has arranged for the YMCA North Staffordshire to become a local headquarters for Movember and has liaised with Stoke City Football Club whose players grew moustaches for the cause a year ago.

German international centre half Robert Huth has agreed to lead the Movember fundraising effort at the Premier League football club.

Sam Warrilow of Titanic Brewery said: “It is fantastic that our home city has taken Movember to its heart and the staff at our brewery and the pubs are keen to get involved.

“As well as the special Movember fundraising beer, landlords will be arranging special events and we plan to run a “Grow a Mo Like Captain Smith” campaign.

“Edward Smith, the Captain of the Titanic is from Stoke-on-Trent, and was well known for his luxurious moustache.”

Angela Smith, who helps to run Knot FM based at the YMCA in Harding Road, said: “The people of Stoke-on-Trent are known for their generosity and the Movember organisation has recognised this by mounting a special campaign in the city this year.

“We are planning a series of events at the YMCA and have linked up with Stoke City where Robert Huth has pledged to get the playing squad behind Movember.

“I’m really pleased that Titanic Brewery is also throwing its weight behind Movember.  Their pubs are a t the heart of the community and make a terrific effort to raise funds for good causes.