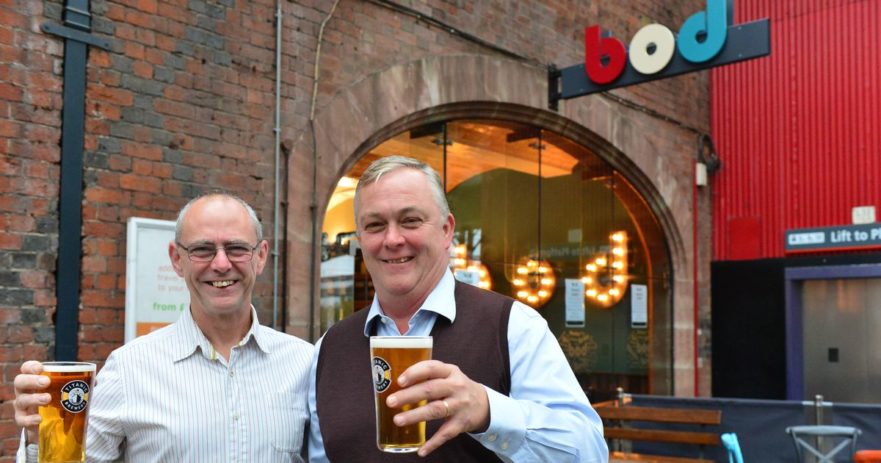 A new bod café bar will be opened by Titanic Brewery in Trentham on Monday, 29 April.

Located in a former bank building on Longton Road, it is the third Titanic bar to open in the brewery’s innovative new café bar concept.

bod café bars have been a major success in Stafford and Stoke and the Trentham bod has been eagerly awaited by many local residents.

Around £300,000 has been invested in creating a stylish new café bar in a collaboration between Titanic Brewery and long-term partners Everards Brewery.

In common with the first bod, opened a year ago at Weeping Cross, Stafford, the new bod will open for breakfast at 8am and trade until 11pm. It operates as a café throughout the day, serving coffee, tea and light dishes from breakfast time onwards, with craft and real ale available for lunchtime and evening customers.

“The new bod is looking fantastic and we cannot wait to open the doors on Monday,” said Titanic Brewery Director Dave Bott. “It has been a lengthy process, transforming the former bank into a café bar, but we are extremely happy with the look, feel and finish of bod Trentham and also have seen a lot of support along the way from many local residents.”

bod gained its name from the location of the Stafford café bar in Bodmin Avenue, Weeping Cross. A second bod opened at Stoke station in autumn 2018 and there are more to follow, with Titanic Brewery recently acquiring another development site, a former NatWest bank building att the heart of Newport, Shropshire.

Up to 20 jobs will be created at bod, with the Titanic crew being led by manager Matt Kent.

“Matt worked as a supervisor at our first bod and is a product of our own management training programme,” said Dave Bott. “The Stafford bod is very much part of the local community and is well used throughout the day by local residents and we are confident that Matt and his team can build that community spirit in Trentham too.

“Titanic Brewery is known for our award-winning community pubs and the bod concept is an evolution designed to meet a new desire by our customers for a multi-purpose venue that offers a comfortable space for coffee and a light breakfast or lunch before evolving into a craft beer café bar for visitors from lunchtime onwards.”

It has a long relationship with Everards Brewery, involving joint investment in pub premises in the Staffordshire area.

Titanic Brewery is owned by brothers, Keith and Dave Bott. The brewery was founded in 1985 and has grown to produce over 4 million pints of beer a year. It now employs around 150 people at the brewery and across the pubs and bod bars.

Titanic Brewery produces a range of multi-award winning beers, including Iceberg and Plum Porter, which are sold at pubs across the UK and available in bottles from many off licenses, supermarkets and online retailers.