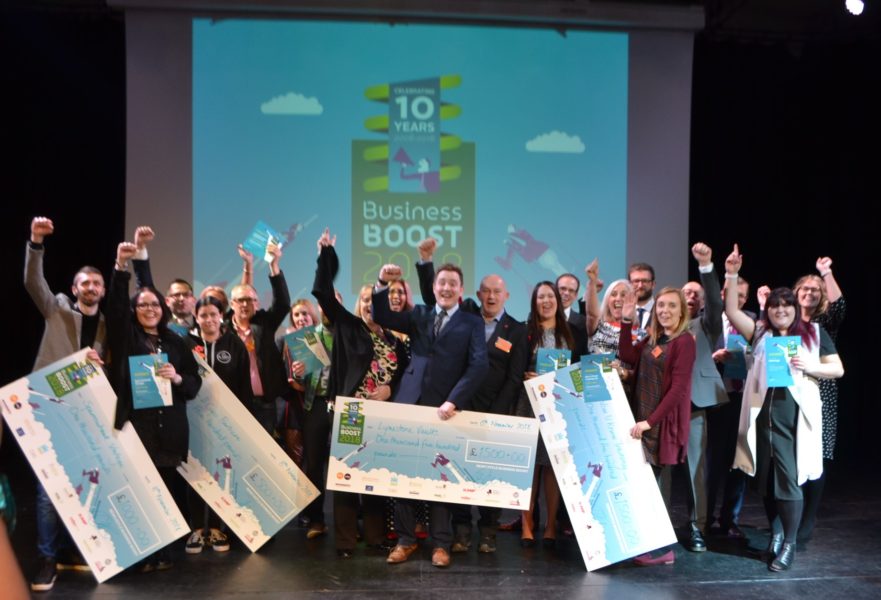 Business growth and potential were under the spotlight as the Newcastle-under-Lyme Business Boost competition unveiled its 2018 winners.
A diverse range of finalists took to the stage for the awards event held at Newcastle-under-Lyme College’s Performing Arts Centre as Business Boost celebrated its 10th anniversary.
An expanding training business, a town centre pub and a vintage clothing store took the three major prizes with a barbers shop, which features specially planned services for autistic children, scooping the special judges’ prize, named in honour of Philip Astley, the “father of the circus.” Il Capo Barbiere, was opened by Sophie Davies, in December, 2017.
Now U Know Training won the award for Entrepreneurial Spirit. Based at Lymedale Business Centre, Now U Know has grown from a business specialising in asbestos training to offer more than 160 different modules to companies across the UK.
The Lymestone Vaults took the Impact on the Borough prize. The pub, run by award winning Staffordshire brewery Lymestone, was recognised for its warm welcome and hard work to support the revival of the Fogg Street area of Newcastle town centre. The pub’s owners were among the first to bring local craft ale to the town.
The Newcastle-under-Lyme BID award went to Sparrow Hawk Vintage Clothing, located at the junction of Liverpool Road and Bridge Street. The category is open to businesses in the Newcastle town centre Business Improvement District.
Each category winner received a cash prize to spend on business development and there was a range of further awards on offer.
These included the award of a year’s free membership of Staffordshire Chambers of Commerce which went to H&B Electrical Services, based at Brampton Sidings. A part-funded apprentice prizes sponsored by the Aspire Group dation and PM Training, was awarded to Kidsgrove-based Posh Pugs. The dog grooming business has shown repeated growth, despite a major fire at their main Kidsgrove store. Posh Pugs has opened dog grooming parlours in Winsford and Middlewich and is looking for a further site in Newcastle borough.
H&B Electrical Services were also recognised with the award of a free business stand at the 2019 Let’s Do Business exhibition, hosted by Staffordshire Chambers of Commerce.
Business Boost is run by the Newcastle-under-Lyme business community. A steering committee plan the annual competition and raise sponsorship to fund the prize pool. Its unique selling point is its concentration on business potential, with entries being judged on what they can achieve rather than on past glories.
Entrants are given support to develop business plans and encouraged in their efforts to create jobs and growth in the borough of Newcastle-under-Lyme.
Committee Chair Sarah Da Silva, said: “This year’s competitors were of a high standard and it was also fantastic to see record entries in our 10th anniversary year.”Business Boost was launched to reward and encourage businesses with potential to grow and we have seen many success stories over 10 years. Previous prize winners, Rydale Roofing, Appointments Personnel, Best of British Beer and Home Instead were on this year’s organising committee and a 2018 finalist told us how an apprentice, gained through the Business Boost Awards, has now moved into a management position with the firm.”The awards were presented by special guest, Gareth Higgins MBE, Managing Director of the Newcastle Borough based KMF Group.
ENDS
For media enquiries please contact Nigel Howle by telephone on 0776 2043436 or by email at nigel.howle@howlecom.co.uk